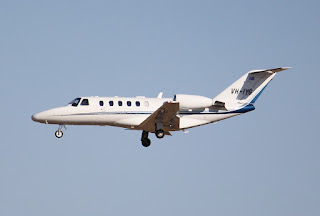 It appears that the sleek Citation arrived direct from its Adelaide base.

At the time of writing, it appears that VH-IYG remains parked at Longreach Airport.

Meanwhile, on Saturday 21 September, the Queensland Government Airwing (State of Queensland) Raytheon Hawker 850XP bizjet VH-SGY was noted also visiting Longreach Airport.  It looked to arrive from and then later depart back to Brisbane.