On Thursday 12 September, it appears that a Chinese-registered Learjet 36A bizjet B-4185 made a surprise visit into Longreach Airport while completing a flight from Darwin to Sydney. 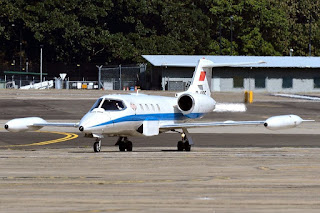 B-4185 appeared to take on fuel at Longreach Airport before continuing to Sydney where it is pictured above.

Of interest, it appears that B-4185 has previously operated for the Chinese Government / The People's Liberation Army Air Force (PLAAF) as a spy plane!

Meanwhile, another, but more familiar corporate bizjet to pop into Longreach Airport, but late on Wednesday 11 September, was LifeFlight (Aeromed) Bombardier Challenger 604 bizjet VH-URR "Ambulance 604".  It arrived from Brisbane and later returned to the capital via a stop at Roma Airport.

A slightly smaller corporate turboprop to be noted also passing through Longreach Airport, also on Thursday 12 September, was Pegasus Air Pilatus PC-12/47E VH-JMU.  It arrived from Cairns via Dinah Island and later departed to Lake Macquarie Airport in New South Wales and then Bankstown.

Finally, back on Tuesday 10 September, a nice corporate helicopter in the form of Gulf Aircraft Agusta AW119 MKII VH-PYO was noted passing through Longreach Airport.  It arrived from Redcliffe via Roma Airport and later departed to Mount Isa.

Sincere thanks to Sydney-based specialist aviation photographer Grahame Hutchison for allowing us to share his great photo of a nice little bizjet.