An interesting arrival into Hervey Bay (Fraser Coast) Airport during the late afternoon on Thursday 26 September was new Royal Australian Air Force (RAAF) Pilatus PC-21 A54-029.  It arrived from RAAF Base East Sale in Victoria via Tamworth in New South Wales and was heard to be using the radio callsign of "Aladdin 72". 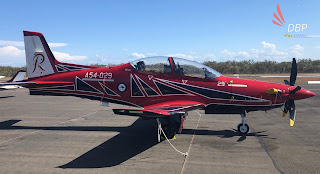 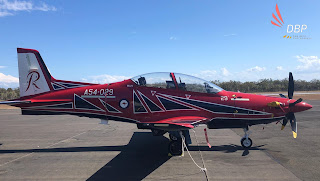 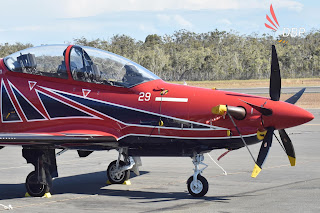 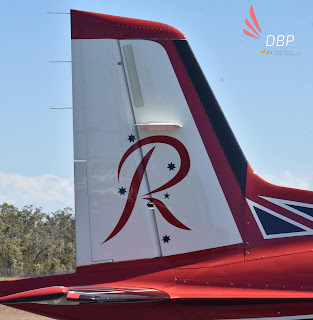 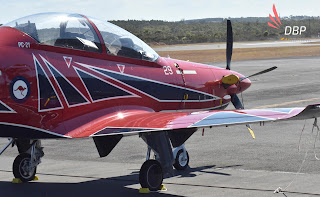 As far as we know, this is the first time that one of the RAAF's new PC-21 turboprop aircraft has called into a Central Queensland airport.

The RAAF has acquired 49 new Pilatus PC-21 aircraft and 7 flight simulators as part of the AIR 5428 Pilot Training System project, with the PC-21 aircraft replacing the RAAF's current Pilatus PC-9/A aircraft.  They will be based at RAAF Base East Sale in Victoria and RAAF Base Pearce in Western Australia.

A54-029 appears to be currently based at RAAF Base East Sale with No.1 Flying Training School (1FTS) (Central Flying School RAAF).  It also wears the colours of the RAAF's elite formation aerobatic display team - The Roulettes.  A54-029 is reportedly the eleventh PC-21 to be delivered in this livery.


As shown, A54-029 was delivered to the RAAF in February 2019 and wore the delivery registration marking of HB-HWC.

UPDATE!  After spending the weekend parked, A54-029 departed Hervey Bay (Fraser Coast) on Monday 30 September, bound for RAAF Base East Sale via RAAF Base Amberley and Dubbo in New South Wales.

Photos taken by Dan B and Tony Haynes  ©
Posted by Damian F at 8:29 PM