On Monday 9 September, American-registered Gulfstream Aerospace G-V-SP (G550) bizjet N103AK was noted arriving into Hamilton Island Airport from Melbourne (Tullamarine) Airport.  It had arrived there from overseas over the weekend. 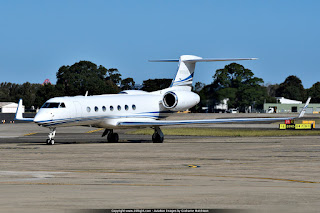 At the time of writing, the sleek Gulfstream appeared to be staying for at least the night.

Meanwhile, American-registered Eclipse EA500 bizjet N257AK continues to call into the region, arriving back into the Whitsunday Airport at Shute Harbour from Archerfield also on Monday 9 September.  It had flown South to Archerfield from Proserpine (Whitsunday Coast) Airport last Thursday 5 September.