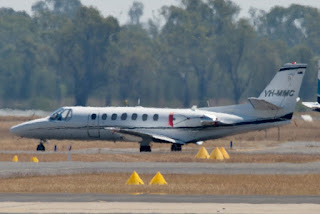 It looked to have earlier arrived from its Sunshine Coast Base.

After spending much of the day parked, VH-MMC later returned to the Sunny Coast.

Meanwhile, late on Friday 13 September, Corporate Aircraft Charter (South Australia) Cessna 550 Citation II bizjet VH-ZLE was noted visiting a couple of CQ Airports. It looked to arrive into Mackay Airport from Brisbane before continuing to Cairns.  VH-ZLE then flew down to Emerald Airport before returning to Brisbane.