Another interesting visitor into Longreach Airport also on Friday 17 January was Aerorescue (ex-AMSA) Aero Pearl Dornier 328-100 VH-PPG.  It looked to call in directly from Darwin where it has been parked for some time.


After taking on fuel, VH-PPG departed Longreach Airport for HMAS Albatross at Nowra in New South Wales.  It has reportedly been acquired by the locally-based Air Affairs (Australia).

As seen below, a new search and rescue agreement was signed in October 2014 seeing Cobham SAR Services Pty Ltd (Cobham) contracted to provide four Bombardier Challenger CL-604 bizjets from late 2016 for a period of 12 years. 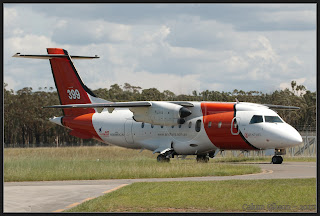 Air Affairs (Australia) was established in 1984 with headquarters based at the Albatross Aviation Technology Park at Nowra in New South Wales.  They have been providing target services, fire surveillance and precision engineering support services to the Australian Defence Force (ADF), other military forces and Governments since 1995.