A couple of nice bizjets were spotted and noted passing through Longreach Airport on Monday 6 January.

During the early part of the morning, Graham Aviation (Cairns) Cessna 510 Citation Mustang bizjet VH-FNI was back in Central Queensland, firstly flying from its Mareeba base direct to Hamilton Island Airport.  It then flew across all the way down to Longreach Airport where it was photographed by local plane spotter Greg W. 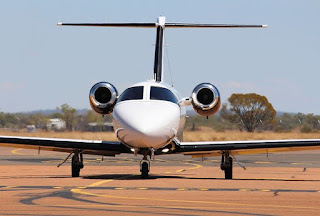 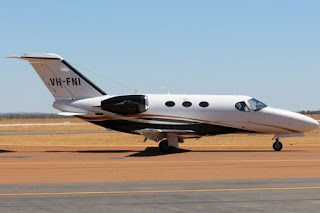 After taking on fuel, VH-FNI departed Longreach Airport and continued to Ayers Rock.  It later flew back to Mareeba.

Of interest, it appears that VH-CXJ "Ambulance 452" completing a medical evacuation flight into Charleville Airport on Sunday 5 January.  It looked to arrive from and later departed back to Townsville.

Meanwhile, up in the Whitsundays, American-registered Eclipse EA500 bizjet N257AK was noted returning to its part-time home at the Whitsunday Airport at Shute Harbour also on Monday 6 Janaury.  It touched down from Archerfield and appears to be staying for at least the night.

While appearing to depart the Whitsunday Airport at Shute Harbour but on Sunday 5 January was  Hawker Beechcraft G58 Baron VH-EZD it departed to its Monto Airport base via a missed approach at Gladstone Airport.  VH-EZD looked to arrive into Hamilton Island Airport from Monto Airport on Friday 27 December.

While also on Monday 6 January, Brisbane-based Piper PA-31-350 VH-RPV visited Moura and Hamilton island Airports while flying out of and back to its Archerfield base.

Finally, over the weekend, Sunshine Coast-based Rockwell International 114 VH-KSW was in region.  On Saturday 4 January, it flew from its Caloundra base to Emerald and Longreach Airports.  Then on Sunday 5 January, VH-KSW returned to Caloundra via a missed approach at Charleville Airport and a landing at Roma Airport.

Sincere thanks to local plane spotter Greg W who was at the right place at the right time at Longreach Airport to capture the visiting Citation!