VH-VAU departed Coffs Harbour for the Gold Coast before passing through Bundaberg and Rockhampton Airports and eventually landing at Mackay Airport.


As the photos above show, VH-VAU now wears the distinctive yellow, blue and orange colours of the Mackay Airport based RACQ Central Queensland Rescue (CQ Rescue).  It will reportedly now have sponsor stickers applied and replace the similarly coloured and fellow Babcock Bell 412 helicopter VH-LSY.

VH-VAU had flown South to Coffs Harbour from Rockhampton Airport in August 2019 after it had operated with the locally-based locally-based Capricorn Helicopter Rescue Service (CHRS) for a period of time as "Rescue 300". 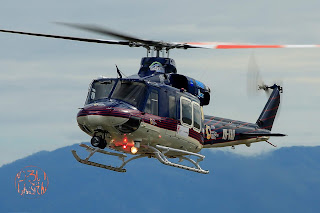