After the announcement over the weekend of further deployments of Australian Defence Force (ADF) aircraft, helicopters and personnel to assist with the continuing bushfire emergency gripping parts of Australia, on Sunday 5 January, one further Australian Army Boeing CH-47F 'Foxtrot' Chinook helicopter was noted passing through Rockhampton Airport while heading South from its Townsville base. 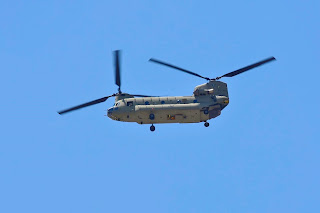 The Chinook was photographed departing Townsville (above) and identified as A15-309.  It was heard to be flying as "Brahman 359".  A15-309 is one of three further Chinooks of the Army's 5th Aviation Regiment (C Squadron) based at Townsville that were committed to provide support, although the other two will reportedly remain at Townsville 'on standby'.

As we reported below, three other Australian Army Chinooks - A15-301, A15-308 and A15-303 - all flew South late last week and have been integral in evacuating people of bushfire affected towns in Victoria.

It also appears that with this additional boost in the support provided by the Australian Defence Force (ADF) during the current bushfire crisis currently gripping parts of Australia, there will be a further deployment of as many as four Australian Army NH Industries MRH-90 Multi-Role Helicopter from their Townsville base.  Reports suggest they could pass through Rockhampton Airport heading to Sydney as early as Monday 6 January.

The ADF is continuing to support Emergency Management Australia in firefighting efforts around the country by providing transport and other capabilities including aviation, logistics, engineering and accommodation.

Sincere thanks to local plane spotter 'Shinpow 16' for taking the time to capture and send through the photo of Chinook heading South!