On Saturday 25 January, a very sleek bizjet in the form of TAG Aviation Asia Gulfstream Aerospace G-VI (G650ER) VP-CPU was noted arriving into Hamilton Island Airport.  It touched down from Cairns - where it is pictured below arriving from Auckland. 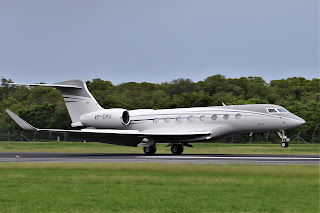 At the time of writing, it appears that VP-CPU is staying on Hamo for at least the night.

Of interest, VP-CPU was noted using the same flight number and callsign of 'TBJ93' / "TAG 93" for all of its flights.

Meanwhile, also noted arriving into Hamilton Island Airport, also on Saturday 25 January, was Hinterland Aviation Cessna 402C VH-TFK.  It was flying as 'HND430' and flew in from Cairns via Lizard Island.

At the time of writing, it is due to depart back to Cairns from Hamo during the middle part of the morning on Sunday 26 January.