On Wednesday 22 January, Royal Australian Air Force (RAAF) Dassault Falcon 7X bizjet A56-003 was spotted at Charleville Airport.  It appears to have arrived direct from Canberra and was heard using the radio callsign of "Envoy 62". 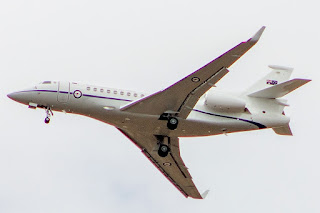 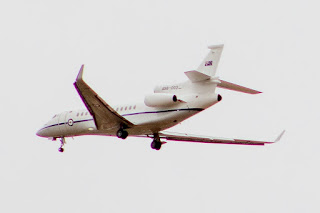 After some time on the ground, A56-003 departed Charleville Airport and returned direct to Canberra.


It looked to arrive from Bankstown and Scone in New South Wales and later departed to those two places.

Of interest, VH-JMU is a familiar registration marking in Central Queensland, but the PC-24 was delivered into Broome and Adelaide from overseas in early December.  It now appears to be based at Bankstown.  The PC-24 has seemingly replaced PC-12/47E VH-JMU of Pegasus Air (New South Wales) which completed its last flight in late-October and appears to have since been re-registered as VH-JKU.

Photos and Video taken by Zac Fitzgerald and Tony Haynes  ©
Posted by Damian F at 9:04 PM