A Pair of Aerorescue Dornier 328 Aircraft in Central Queensland

On Saturday 26 January, a pair of Aerorescue (AMSA - Australian Maritime Safety Authority) Dornier 328-100 aircraft were noted flying through Central Queensland.  The aircraft are operated by Aero Pearl in Darwin. 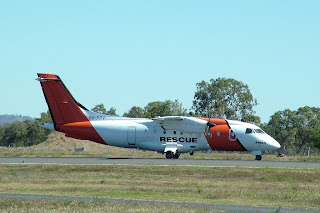 VH-PPV (pictured below at Rockhampton Airport in 2011) was actually noted arriving into Mackay Airport from Cairns on Friday 25 January.  After overnighting back at its Cairns base, VH-PPV was believed to have returned to Mackay on Saturday 26 January, where it performed two return survey flights using the callsign "Rescue 441".

Meanwhile, VH-PPQ was noted ferrying through Longreach Airport on Saturday 26 January.  VH-PPQ had arrived from its Darwin base, and later departed Longreach for Brisbane
Posted by Damian F at 8:22 AM