This historic post has ballooned from what I originally thought - I had prepared a couple of photos to post of some old Virgin Blue aircraft in special colours - but after further research I have found several more examples of both Virgin Blue and also Virgin Australia aircraft that have been painted in special colours over the years - some that Central Queensland Plane Spotters may have been able to photograph!

Virgin Blue started operations in the year 2000 with two aircraft operating on a single route.  The airline quickly grew and so did the number of aircraft it operated - for some time, it operated ex-Ansett Boeing B737-300 VH-CZQ, flew in a white colour scheme, and eventually featured a red-nose. 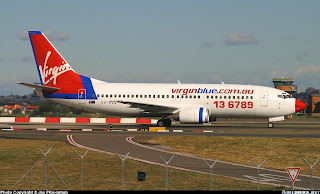 The red-nose has become a feature of the newer Virgin Australia Boeing B737-800 aircraft, with VH-YIE spotted in Cairns recently sporting a red nose. 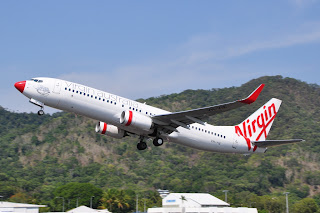 One other aircraft has been recently spotted wearing a red-nose, however this aircraft was one of the first aircraft the Virgin Blue acquired to wear a full special colour scheme.  Boeing B737-700 VH-VBY was delivered to Virgin's Brisbane base in a special blue colour scheme to commemorate the fact that it was Virgin's 50th aircraft. 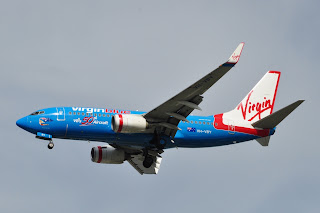 Since then, VH-VBY was (unfortunately) re-painted into Virgin Australia livery - and recently spotted wearing that red-nose. 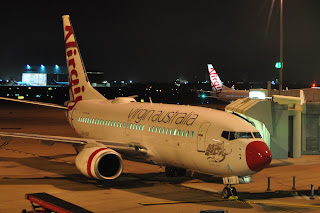 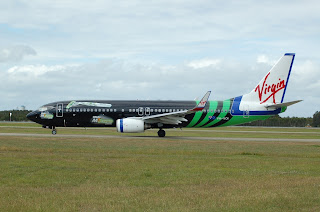 VH-VOJ was painted in a colour scheme promoting the State of Queensland - also to commemorate Virgin Blue being established in Queensland with Government assistance. 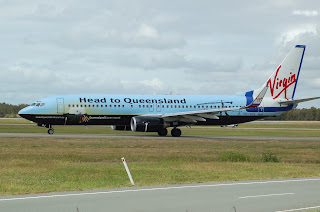 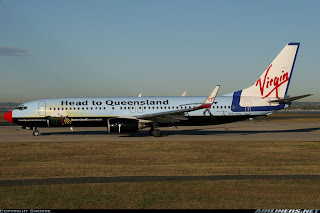 Both aircraft were spotted on occasion in Central Queensland at Rockhampton, Mackay and Hamilton Island Airports.

Funnily enough, as the new white Virgin Australia aircraft were being delivered some of the older red Virgin Blue aircraft were adorned with white-nose cones - as shown in the photo below of VH-VON. 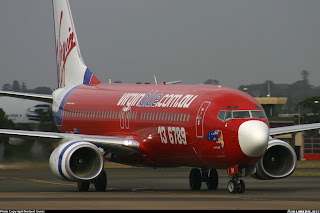 Over the years, there were a couple of other Virgin Blue Boeing B737-800 aircraft to wear special colours, with VH-VUA painted with a South Sydney Rabbitohs Rugby League team flag on its nose.  Later VH-VUA also had special decals added to promote the Black Eyed Peas Band, and their performance in the aircraft which they dubbed "Mile High Karaoke". 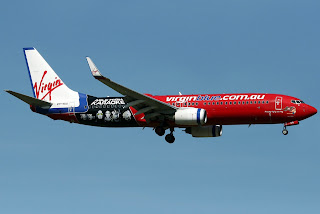 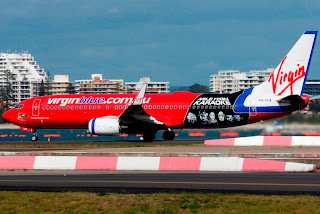 To promote the release of the film "Avatar", Virgin Blue added decals to their Boeing B737-800 VH-VUL. 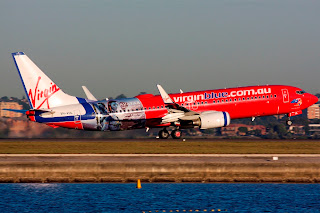 Boeing B737-800 VH-VUY and Embraer E-190 VH-ZPQ had matching decals promoting that Virgin Blue was the official carrier of the AFL. 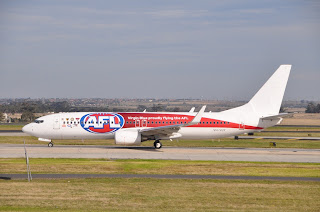 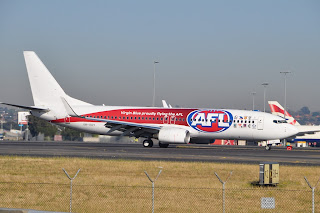 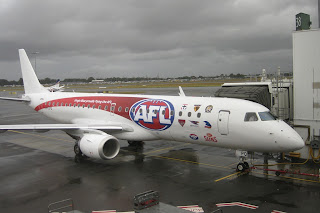 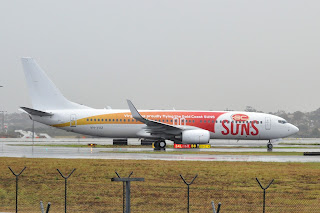 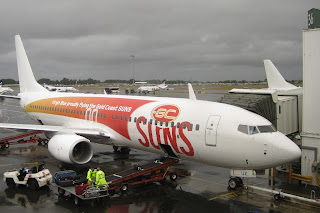 Lastly, for the AFL Grand Final, Virgin have added a short-term special sticker to the underside of their new Airbus A330-200 aircraft was shown on VH-XFD. 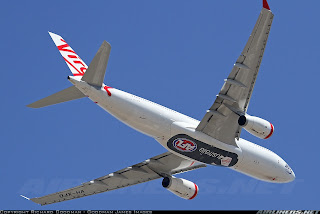 Since, all of these aircraft have been repainted into Virgin Australia's standard livery.

One other special livery to adorn Virgin Blue and Virgin Australia aircraft has been the Boeing B737-800 and Embraer E-190 aircraft that were painted in Pacific Blue colours as shown on B737-800 VH-VOX and E-190 VH-ZPM. 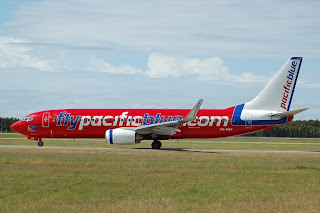 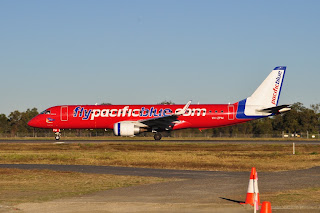 The B737-800s often flew domestic-Australian routes, and were sometimes substituted onto International services for Pacific Blue.

Recently, the B737-800 aircraft have been repainted, and the Pacific Blue colours on the fuselage removed.  Smaller titles "Airline of Virgin Blue" were added and then 'edited' as shown on B737-800s VH-VOQ and VH-VOX. 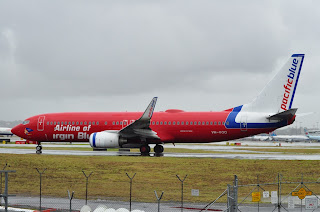 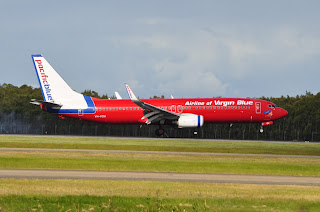 Some of these aircraft to wear Pacific Blue colours and Airline of Virgin Blue colours have now been repainted into Virgin Australia livery - VH-VOQ, VH-VUF, VH-VUG are examples.

One last livery that is worth mentioning - despite the fact we are unlikely to see it Central Queensland - has been Pacific Blue's B737-800 ZK-PBF which was painted in Polynesian Blue colours of Western Samoa. 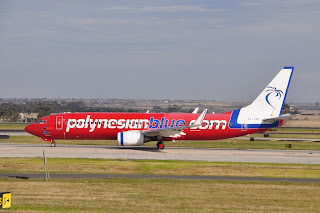 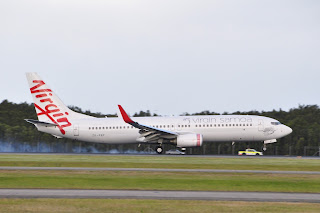 Some great photos and some great colour schemes!
Posted by Damian F at 3:30 AM