A very busy day at Gladstone Airport on Sunday 27 January with multiple - and mostly - QantasLink arrivals - both Dash-8 and Boeing B717-200 aircraft - but also an Alliance Airlines Fokker F-100 touching down twice, and also a mix of smaller charter aircraft and helicopter movements.

As mentioned below, QantasLink (Cobham Aviation) Boeing B717-200 VH-NXG was forced to divert to Gladstone Airport while operating the QJE1730 service from Brisbane to Rockhampton.  VH-NXG reportedly circled Rockhampton for some time, and eventually landed at Gladstone.

Soon after, another B717-200 in the form of VH-NXI touched down, and as Jamie C's photos show, it joined VH-NXG on the lower apron at Gladstone Airport.  Quite rare to see two B717-200s on the ground at once.

Also on the ground was QantasLink Dash-8-Q300 VH-TQZ.  It was photographed later departing for Brisbane as QLK2301.

B717-200 VH-NXI was also captured departing by Jamie C - some very spectacular photos! 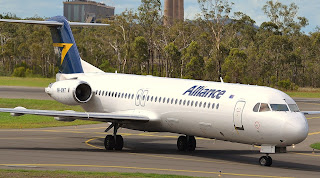 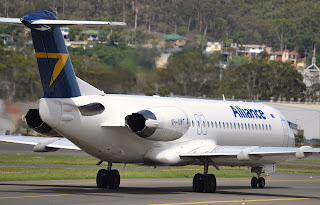 VH-XWT later departed to Brisbane as QLK2343, however, due to the poor weather at Brisbane, it pretty much flew straight back to Gladstone, and Jamie C photographed VH-XWT shortly after it touched down at Gladstone for the second time in the afternoon!

Later, VH-XWT again departed Gladstone for Brisbane as QLK2343, with it successfully landing in Brisbane in the evening.

There were plenty of other movements at Gladstone Airport on Sunday 27 January that kept Jamie busy - and he managed to capture some fantastic images of most of the many and varied light and helicopter visitors during the afternoon. 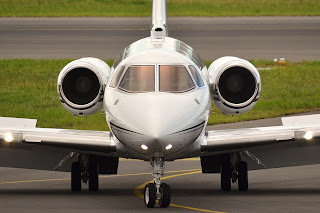 Hervey Bay-based Cessna 402A VH-RDZ of Aero Commute Australia touched down at Gladstone from Hervey Bay.  It is pictured below departing back to Hervey Bay, however information suggests that VH-RDZ has been very hard-working over the last couple of days, flying up and down the Queensland coast, no doubt in support of the flood relief operation underway in many Queensland coastal towns and cities.

Lastly, Jamie spotted no-less than seven helicopters that popped into Gladstone Airport during the afternoon of Sunday 27 January.  Most of these choppers were providing support flights to the nearby flooded regions in Central Queensland.

Emergency Management Queensland (EMQ) (State of Queensland) Bell 412EP VH-ESB was spotted by Jamie departing on a sortie.  VH-ESB is based in Townsville, and was also noted at Rockhampton Airport, before finishing the day at Bundaberg Airport.  (Incidentally, VH-ESB featured prominently in news bulletins on Monday 28 January performing various winching recoveries in flood-devastated Bundaberg.)

Smart looking Eurocopter EC120B VH-VTG popped in - this chopper is operated by Avalon Aviation - their EC130B VH-EHY was spotted at Rockhampton (see below).

Whitsunday Helicopter's Agusta A109E VH-TRW was photographed at Gladstone Airport.  VH-TRW has been busy over the last couple of days, with it being noted at Rockhampton, Emerald, and Biloela / Thangool Airports.

As can be seen in the photos above, the weather in Gladstone is on the improve, however with over 800mm of rain that fell over Gladstone and the surrounding areas over the last few days, the flood crisis on some parts continues.  We wish residents well.