Helicopter Action at Rockhampton and Gladstone Airports on Saturday

Local plane spotters, 'IAD' and Jamie C have had a good spotting day on Saturday 26 January capturing some helicopter action at Rockhampton and Gladstone Airport. 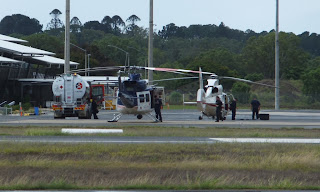 IAD reports that the main Runway 15/33 at Rockhampton Airport was in fact closed this morning due to water encroaching on the runway.  Information suggested that authorities were looking at opening the runway this afternoon, but with a reduced operational length.  Up to then only helicopters and smaller General Aviation type aircraft were able to take-off and land. 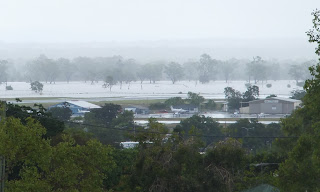 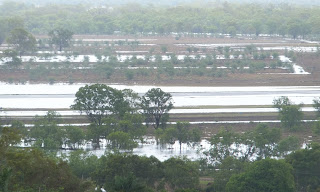 This afternoon, commercial movements resumed, however these were limited to turbo-prop aircraft, with jets still unable to use the shortened Runway 15/33.

This morning, IAD captured a couple of fantastic images of the Central Queensland Rescue Helicopter Service (CQ Rescue) Bell 412 VH-BZH as it departed Rockhampton Airport for air-work to assist in the search for a missing man off the coast. 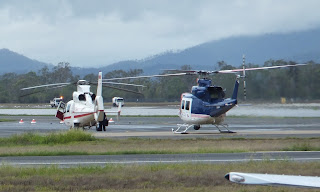 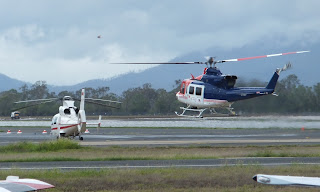 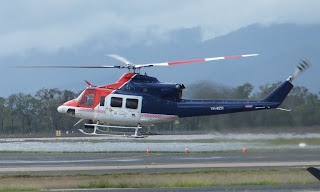 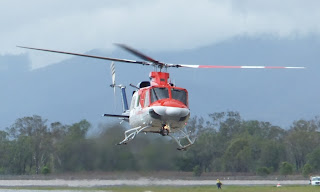 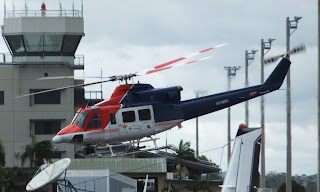 VH-BZH had earlier ferried into Rockhampton from Mackay, and was heard to be using its regular callsign of "Rescue 422".

Also spotted on the Rockhampton Airport apron with VH-BZH was Aerospatiale AS.365N2 Dauphin VH-NAR which is operated by McDermott Aviation.

This was one of three choppers spotted by Jamie during the day at Gladstone Airport - on a day where the weather seemed to be on the improve.  However, the damaging torrential rain and wind that has hit Gladstone and the surrounding area in recent days is still affecting locals, with local rivers and creeks flooded, and some residents being encouraged to evacuate their homes.

Meanwhile, Jamie has also sent through some superb and 'dramatic' images of QantasLink Dash-8 aircraft as they arrived and departed at Gladstone Airport during the day.

Royal Flying Doctor Service (RFDS) Hawker Beechcraft B200 King Air VH-FDT was about the only other movement noted at Gladstone Airport on Saturday 26 January.  It arrived from and later departed back to Brisbane as "FlyDoc 436".

There were no Virgin Australia flights into Gladstone Airport on Saturday 26 January.  Travellers and any other concerned people should contact their airline for any enquiries or for flight delays and cancellations.