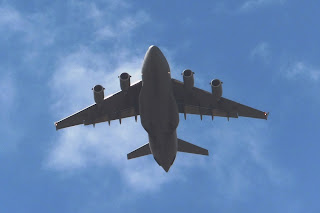 However, Rockhampton Airport plane spotters have also reported that a RAAF Airbus A330-200 / KC-30A Multi Role Tanker Transport (MRTT) – possibly A39-002 flying as “Dragon 13” – and a Boeing B737-7ES (BBJ) AWACS "Wedgetail" – possibly A30-002 flying as “Wedgetail 01” – also conducted approaches into Rockhampton Airport later in the afternoon and evening.

Then on Tuesday 22 January, RAAF B737 Wedgetail A30-001 flying as “Wedgetail 21”, was also noted flying into Rockhampton Airport, and performing an overshoot on Runway 15.

An exciting start to the week - pity about the forecast rainy weather for the rest of this week!