As I write this post late on Friday 25 January, parts of Central Queensland are struggling under record rainfall and strong wind caused by ex-Tropical Cyclone Oswald.  The system has slowly moved South along the North and Central Queensland coasts, dumping hundred of millimetres of rain, and bring strong gusty winds.

This combination has seen a huge amount of flight delays and cancellations at most Central Queensland Airports over Thursday 24 January and into Friday 25 January, with all the airlines cancelling flights, and of those flights that do depart, few , if any, have been able to land.

I have received reports from plane spotters in Rockhampton that at the Airport, water was starting to encroach on the field, with Taxiway Juliette closed, and part of the main Runway 15/33, was closed as well.  The Airport itself has remained open, however, very few flights have been noted getting in over the course of yesterday and today.

The Rockhampton Regional Council was also advising that anyone who has a car in the Airport carpark were advised to have it moved to higher ground.  'IAD' sent through a photo of a fast flowing creek near his place - as he stated in the email - he'd never seen it flow so strongly. 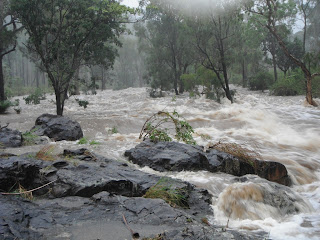 At this stage (thank goodness) the scene at Rockhampton is not quite as bad as the flooding during 2011. 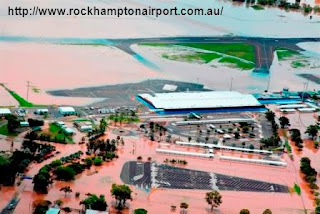 In Gladstone, Shane T reported that the main road linking Gladstone to Boyne Island / Tannum Sands was cut, while Jamie C reported via Facebook that as well as the rain continuing the pour down near the Airport, winds gusts were being recorded at over 50 knots!

Like Rockhampton, Gladstone Airport has remained open, although very few movements have been noted, with most aircraft scheduled from Brisbane unable to land and returning to Brisbane.

The normally peaceful and scenic Awoonga Dam (which Shane T visited late last year) was filling quickly, and was fast approaching its previous high level of 44.6m, with it expected to pass 45m early on Saturday 26 January. 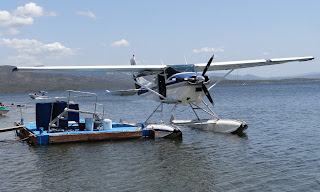 At Mackay and in the Whitsundays, things are slowly getting back to normal, with flight disruptions at Mackay Airport chiefly on Wednesday 23 January and Thursday 24 January.  Minor flooding was also noted on the main access road to Mackay Airport, causing a few headaches for travellers and other motorists trying to access the Airport.

Meanwhile, at Hamilton Island Airport (file photo below on a better day!), is was a particularly busy day on Friday 25 January, with both Jetstar Airways and Virgin Australia Airlines operating additional flights to make up for the previous day where all but two flights to the Island were able to land. 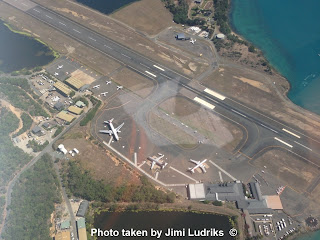 Ex-Tropical Cyclone Oswald continues to move down the Queensland coast with Bundaberg and the Wide Bay / Burnett expected to bear the brunt of the system now.  While the worst is hopefully over for most of Central Queensland, any travellers with any concerns or queries are advised to contact their airline of travel directly.
Posted by Damian F at 11:52 PM