Eagle-eyed and eagle-eared enthusiasts would have noted that on Monday 21 January QantasLink's regional partner Cobham Aviation has made a change to their radio callsigns and flight codes.  Cobham Aviation operates Boeing B717-200 aircraft on behalf of QantasLink in Central Queensland, as well in regional areas of Western Australia. 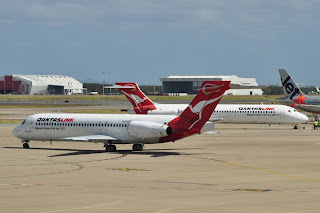 These aircraft had previously flown using their aircraft registration as their call sign.  From today, the Cobham Aviation B717-200 fleet will fly under the "Q-Jet" callsign, with the flight code of 'QJE'.

Finally, Cobham Aviation also operates the four Australian Air Express (AAE) BAe 146F (Freighters).  It is as yet confirmed if the AAE 146's will also gain a code or not.