The Queensland Government (State of Queensland) Raytheon Hawker 850XP VH-SGY has been noted at Thangool / Biloela, Longreach, Rockhampton, Bundaberg, and Gladstone.  As mentioned below, Jamie C caught VH-SGY as it popped into Gladstone on Sunday 27 January.

The Queensland Police Service (Airwing) Cessna 560 Citation Ultra VH-PSU has been noted at Rockhampton and Bundaberg on multiple occasions in support of the flood relief efforts.  Other Police aircraft including Raytheon 1900D VH-PSK and Cessna 208 Caravan VH-PSY have also been noted in the region, with VH-PSY photographed at Rockhampton Airport by 'IAD' on Tuesday 29 January. 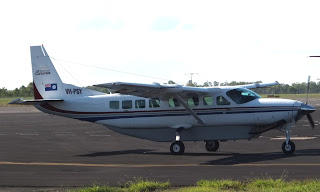 Several other Australian bizjets have been noted in  Central Queensland over the last week or so.  Balmoral Air Dassault Falcon 2000EX VH-WIO (file photo below) was noted arriving into Hamilton Island from Brisbane and Bankstown on Tuesday 22 January.  It departed for Bankstown on Wednesday 23 January.

Also over the weekend, Professional Jet Aviation Cessna 525 Citation CJ1 VH-CDG was noted at Emerald and Middlemount Airports on Sunday 27 January.  It had earlier arrived from the Gold Coast.

On Tuesday 29 January, Sundyne Cessna 650 Citation VII VH-SSZ visited Moranbah, touching down from Wollongong (Illawarra Regional) Airport.  After about half-an-hour on the ground, VH-SSZ returned to Wollongong late in the afternoon.

Lastly, on Wednesday 30 January, Skypac Aviation Cessna 550 Citation II bizjet VH-FYP was noted on the ground at Emerald Airport, having arrived from Cessnock earlier in the morning. Later in the evening, VH-FYP was noted departed Emerald on return to Cessnock.  Meanwhile, at Clermont Aerodrome on Wednesday 30 January, I was lucky enough to photograph Adelaide-owned but reportedly Toowoomba-operated Light Jets Australia Cessna 525 Citation CJ1 VH-TFW as it was refuelling after touching down from Archerfield. 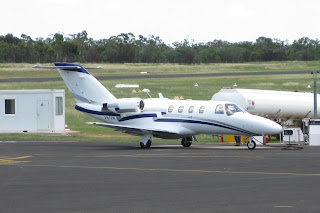 It later returned to Archerfield, making a spectacular departure just after lunch.
Posted by Damian F at 6:40 PM