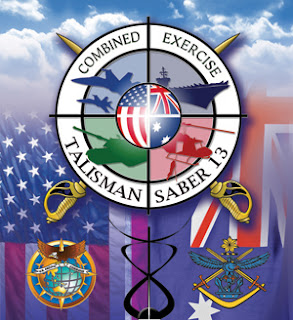 Exercise Talisman Saber (also spelled Talisman Sabre, the spelling alternating between US and Australia) is a biennial joint Australia-United States military exercise designed to train the respective military forces in planning and conducting Combined Task Force operations to improve the combat readiness and interoperability between the respective forces.  This exercise is a major undertaking that reflects the closeness of our alliance and the strength of the ongoing military-military relationship.

Exercise Talisman Saber 2013 is a US led Australian supported exercise conducted primarily in Australia to improve combat training, readiness and interoperability, across a wide spectrum of military activities.  The exercise forms part of the ADF’s extensive training program to ensure the ADF is prepared to protect and support Australia and its national interests. The exercise also contributes to the ability of Australian and US military forces to work together efficiently and safely.  By working with the US military forces, the exercise strengthens proactive and responsive strategies and enhances measures to defend Australia and its national interests.

Exercise Talisman Saber 2013 is scheduled to take place from Monday 15 July to Monday 5 August 2013.  During this period, the exercise participants will conduct preparatory training prior to commencing a more intensive period of tactical training. Military personnel and units will be deploying to exercise start positions prior to the exercise commencement.  Military personnel will also take some time to redeploy post completion of the exercise.  Additionally, US military forces may be taking the opportunity to conduct some unilateral training on Australian ranges both pre and post the exercise.