Virgin Australia is Most Punctual Airline into Gladstone Airport

The Gladstone Observer Newspaper has highlighted The Bureau of Infrastructure, Transport and Regional Economics Domestic Airline on Time Performance Data for December 2012, which released this week, which has found that Virgin Australia was the most punctual airline for departures and arrivals between Gladstone Airport and Brisbane Airport. 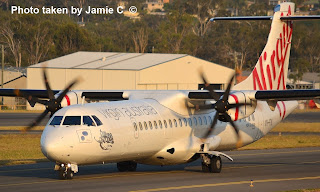 It's a different story for Brisbane Airport however, with figures showing it had the record for the worst arrival times in Australia. Only 69.2% of arriving flights landed within 15 minutes of the scheduled time, with as many as 92 flights a day being delayed.

Brisbane Airport's delays have been caused by the closure of their second runway to facilitate preparatory works for the eventual development of a longer parallel runway.
Posted by Damian F at 6:25 AM