Jamie C caught a glimpse of the little Mustang through the torrential rain that was bucketing down at Gladstone Airport.  ZK-LCA had arrived from Archerfield.

Also through the rain, he photographed QantasLink Dash-8-Q400 Next Gen VH-LQB as it departed Gladstone for Brisbane.

As the day went on, conditions did not improve, and in fact there was minor flooding noted by Jamie on Aerodrome Road next to Gladstone Airport.

There was plenty of water lying around at the Airport - and even on the edges of the Runway - as shown in Jamie's photos when ZK-LCA departed for Archerfield in the afternoon.

Jamie also sent through some images of some of the late afternoon action - in the midst of continuing rain - with QantasLink Dash-8-Q400 VH-QOX arriving and then QantasLink (Cobham Avaition) Boeing B717-200 VH-NXG arriving and later departing.

The latest information from Gladstone Airport suggests that some 112mm has fallen during the day since 9am - I even captured an image of the rain radar early this morning - and it hasn't gotten any better during the day! 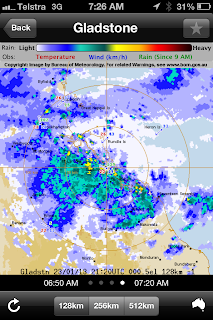 We at The CQ Plane Spotting are thinking of those affected by the severe weather and resulting flooding in North Queensland.