Over the course of Monday 28 January and Tuesday 29 January, as many as 14 helicopters have been involved in rescuing more than a thousand Bundaberg residents in the city's flood-ravaged North. 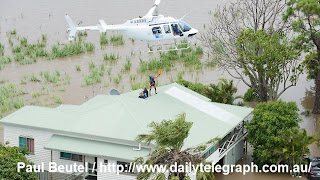 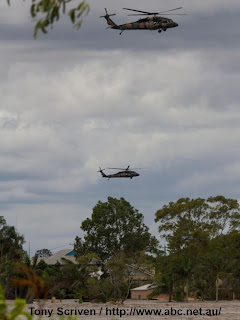 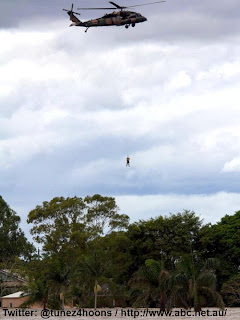 Other specialised rescue and civilian helicopters - including Emergency Management (EMQ) (State of Queensland) Bell 412EP VH-ESB (pictured below at Gladstone Airport) - have also been involved in the winching operations over Bundaberg.

The locally-based AGL Action Rescue Helicopter, along with Careflight Queensland Bell 412 and Aerospatiale AS.350BA Squirrel choppers have also been involved.  Careflight's pair of LearJet 45 aero-med bizjets VH-CXJ and VH-VVI have also been noted at Bundaberg Airport in support of the evacuation operations. 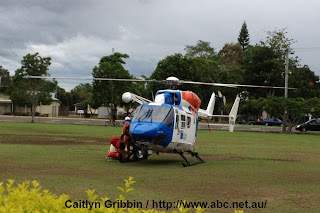 On Tuesday 29 January, a Royal Australian Air Force (RAAF) Lockheed C-130J-30 Hercules A97-448 was involved with airlifting sick and elderly Bundaberg residents to Brisbane - a photo of A97-448 appears on the Brisbane Airport Blog HERE.

There are also unconfirmed reports that a RAAF Boeing C-17A Globemaster III also touched down at Bundaberg Airport late on Tuesday 29 January.

My hat goes off to all the men and women involved in all of the operations in Bundaberg in the wake of what is the worst flooding in Bundaberg ever.
Posted by Damian F at 6:43 AM