Wet Weather in Queensland This Week Causes Some Delays, Diversions and Cancellations at Central Queensland Airports

Ex-Tropical Cyclone Oswald has certainly packed a punch this week, with torrential rain falling up and down the Queensland coastline, and also to inland parts of Central Queensland.  These radar images were taken on Thursday 24 January, and as we posted below, the weather at Gladstone was poor all day, with minor flooding even spotted on Aerodrome Road next to Gladstone Airport. 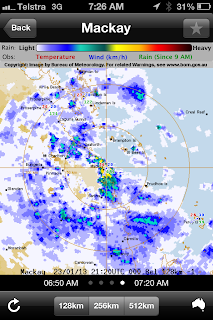 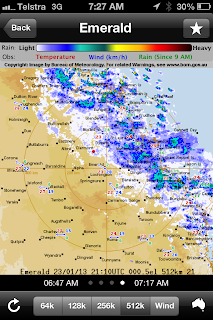 Cairns and Townsville Airports were first to feel the force of the wind and rain, and as a result, there were numerous delays and cancellations at both Airports.  On Wednesday 23 January, Virgin Australia Boeing B737-800 VH-YIF, operating VOZ375 from Brisbane to Townsville was forced to divert to Rockhampton Airport after circling Townsville for some time.  It eventually departed Rockhampton and successfully got into Townsville Airport later in the evening.

There has also been delays recorded at Mackay Airport, Rockhampton Airport, and Gladstone Airport, with a Virgin Australia (Skywest Airlines) ATR 72 from Brisbane, believed to have turned back after being unable to land at Gladstone late on Thursday 24 January.

Local Airport Authorities are encouraging travellers to check with their airlines for any flight delays or cancellations as the weather system continues to track down the Central Queensland coast and further to the South-East corner of the state.
Posted by Damian F at 11:59 PM