The third and final rescue helicopter to be provided for the Capricorn Helicopter Rescue Service (CHRS) and Central Queensland Rescue Helicopter Service (CQ Rescue) by Australian Helicopters has touched down at Rockhampton Airport this week. 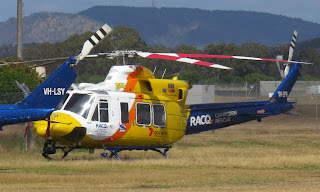 Bell 412EP VH-EPR is shown parked at Rockhampton Airport after arriving on Monday 26 August from Bundaberg and Redcliffe. 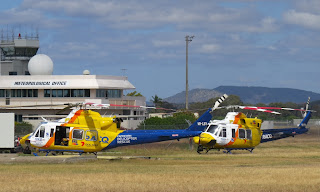 VH-EPR joined the current CHRS and Australian Helicopters-operated Bell 412 VH-LSY outside their hangar as shown above.

VH-EPR joins VH-LSY and fellow Bell 412EP VH-CQJ - which is currently based with CQ Rescue in Mackay - as the three rescue choppers that Australian Helicopters has been contracted to provide to assist with emergency response on behalf of Queensland Health.

It is believed that VH-EPR will eventually become the 'permanent' CHRS chopper, while VH-LSY will be moved to Mackay and hangared to be utilised as an 'operational spare'.  VH-CQJ will continue to operate for CQ Rescue.