Late on Tuesday 7 August, Australian Army NH Industries MRH-90 Multi-Role Helicopter A40-040 was noted completing airwork around Proserpine (Whitsunday Coast) Airport.  It is believed to have flown down from and then later returned to its Townsville base. 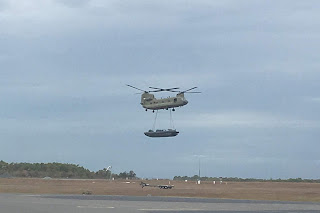 Full details of the Chinook's flight and its purpose are unknown.

Photos taken and supplied by Kayanne Hardsman and 'JM'  ©
Posted by Damian F at 8:50 PM