What appears to be a 'fly-away' of sorts with as many as nine light general aviation (GA) aircraft noted visiting Rockhampton Airport.  During the afternoon on Sunday 12 August, the following aircraft were all noted arriving from Caloundra on the Sunshine Coast.  They had arrived there from New South Wales the previous day.

Local plane spotter Kayanne H popped out to Rockhampton Airport early on Monday 13 August and was able to capture some photos of the visiting aircraft with a couple of them noted departing North to the Whitsunday Airport at Shute Harbour. 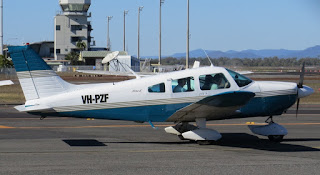 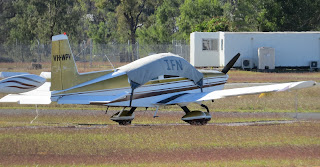 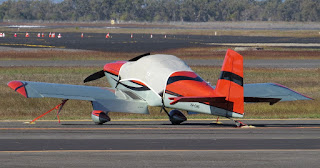 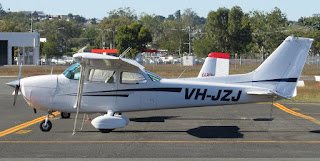 Not photographed as it had already departed was Piper PA-28-140 Cherokee VH-DXF.

Finally, amongst the arrivals on Sunday afternoon was Raytheon A36 Bonanza VH-YGM which arrived into Rocky direct from Orange and also reportedly part of this group. 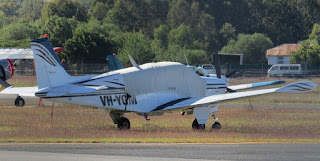 Of interest, Air Traffic Control (ATC) radio chatter suggested that as well as this group, there were a couple of other groups of light GA aircraft flying up inland possibly also from New South Wales along with Victoria.

UPDATE!  It appears that this particular group has continued further North from the Whitsundays with some noted calling into Ingham - but all appear to have now flown into Cooktown in Far North Queensland.

Sincere thanks to local plane spotters Kayanne H and Trevor H for taking the time to capture and send through these great photos, as well as providing the great information provided in this post!

All photos taken by Kayanne Hardsman  ©
Posted by Damian F at 8:32 PM