On Friday 3 August, Royal Australian Air Force (RAAF) Boeing B737-7DF(BBJ) A36-002 was spotted on the ground at Longreach Airport.  It had earlier arrived from RAAF Base Amberley as "Envoy 39". 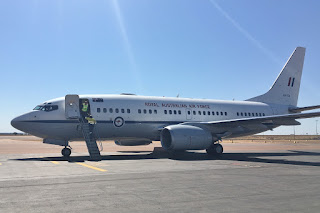 After taking on fuel, A36-002 was then noted flying out towards the South before eventually flying into Canberra.

All photos taken by Calen Harvey  ©
Posted by Damian F at 8:40 PM