Over the last couple of days, as many as four Soar Aviation (Melbourne) BRM Aero Bristell NG-5 ultralight aircraft have been noted visiting CQ Airports while flying North and South through Queensland. 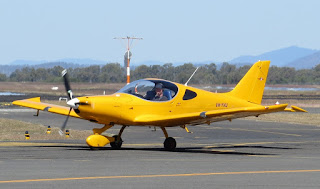 They all appear to have flown up from interstate via an inland route earlier in the week and on Thursday 18 August, are now returning South via the coast.  VH-YVP, VH-YUE and VH-YUU all were noted flying from the Whitsunday Airport at Shute Harbour to Caloundra on the Sunshine Coast and all made a fuel stop at Mackay Airport, while VH-YVU was spotted arriving into Rockhampton Airport also from Shute Harbour before it later continued to Caloundra. 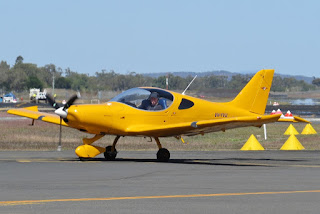 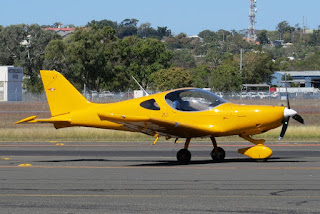 This is the second group of Soar Aviation Bristell's that we know of that have been spotted flying up and down the Queensland inland and coast while on an adventure away from their Melbourne base.

Of interest, Soar Aviation operates flight training out of Melbourne (Moorabbin) and Bendigo Airports, along with Bankstown Airport in Sydney.  They operate a mixed fleet of light and ultralight General Aviation (GA) aircraft.  See more at:  https://soar.edu.au/

Meanwhile, The BRM Aero Bristell NG-5 is a Czech designed low-wing, two-seat in side-by-side configuration, single engine in tractor configuration, ultralight and light-sport aircraft that was designed by Milan Bristela and is produced by BRM Aero. The aircraft is supplied as a complete ready-to-fly aircraft.  See more at:  https://www.bristell.com/

All photos taken by Kayanne Hardsman  ©
Posted by Damian F at 7:00 PM