Certainly an interesting arrival into Gladstone Airport very late on Friday 24 August with Brisbane-based Cessna 525A CitationJet2 bizjet VH-MOR touching down from its Archerfield base via Brisbane. 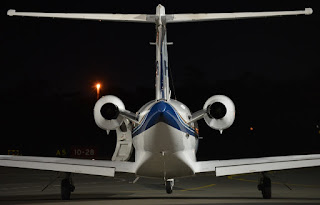 It appears to have made the late night visit to bring an QantasLink engineer to the port city to complete maintenance on QantasLink Dash-8-Q400 VH-QOW which was parked on the Gladstone Airport apron.

With repairs complete, VH-MOR returned to Brisbane and then Archerfield, departing Gladstone Airport just before midnight.

Meanwhile, of interest, VH-MOR has continued to complete flights to Moura Airport - albeit once per fortnight now it seems - but still operating to Moura Airport from Archerfield via Brisbane on a Wednesday afternoon, returning Thursday morning, of which it completed this rotation this week.

All photos taken by Michael Fleetwood  ©
Posted by Damian F at 3:01 PM