On Sunday 26 August, Pacific Aerospace (PAC) 750XL ZK-KED was noted arriving into Mackay Airport from Brisbane.  It had arrived there on Saturday 25 August from Hamilton (New Zealand) via Auckland and Norfolk Island - a journey which took a couple of days. 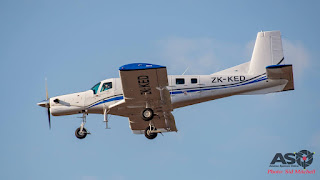 After taking on fuel, ZK-KED departed Mackay Airport for Cairns where it spent the night.

On Monday 27 August, ZK-KED continued to Gove and Darwin where it is pictured above making a late evening arrival.

It is scheduled to depart Darwin early on Tuesday 28 August for Pattimura Airport in Ambon, Maluku, in Indonesia.