Over the course of a couple of days, a pair of Torres Strait Air Pilatus Britten-Norman BN2A-21 Islanders were noted and spotted ferrying South and North heading to and from maintenance in the South East corner. 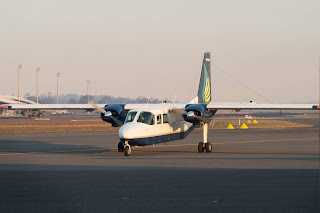 After ferrying from Horn Island during the evening, in the wee small hours on Saturday 11 August, Islander VH-WZP was noted flying into Mackay Airport from Cairns.  After taking on fuel, VH-WZP continued to Archerfield, arriving around dawn.   It is believed that it then entered the maintenance hangar.

Then late on Tuesday 14 August, fellow Torres Strait Air Islander VH-WZD was spotted arriving into Rockhampton Airport, believed to be from the Sunshine Coast. 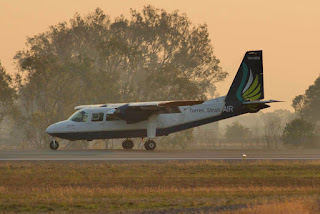 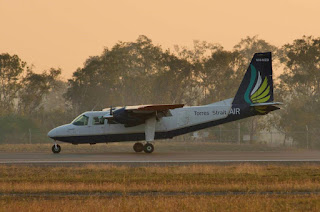 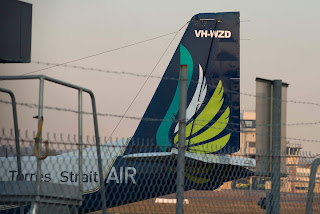 After taking on fuel, it continued to Mackay Airport and then further to Cairns where it was expected to return to service at Horn Island later in the week.

Meanwhile, out at Longreach Airport, an interesting aircraft to ferry back South on Saturday 11 August was FlightTech Air Logistics / Townsville Airlines AeroCommander 500-S VH-WZQ.  After arriving from Cairns, it then departed direct to Swan Hill in Victoria before returning to Ballarat where it appears to be operating once again.  VH-WZQ had returned to the North from Ballarat the previous Saturday 4 August.

All photos taken by Scott Harris  ©
Posted by Damian F at 8:37 PM