Early on Wednesday 3 March, Alliance Airlines Fokker F-70 VH-JFB was spotted at Emerald Airport after arriving from Brisbane operating on behalf of Virgin Australia as VOZ1255. 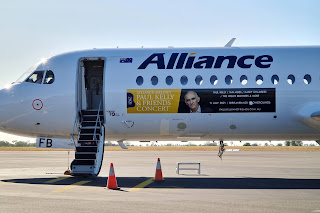 As mentioned, below, VH-JFB was recently adorned with a new sticker on its forward port-side adverting an upcoming charity concert by iconic Australian rock music singer-songwriter, Paul Kelly.
Alliance Airlines continues to operate a single return service each week day between Brisbane and Emerald Airport on behalf of Virgin Australia.
Of interest, this week, on Monday 1 March, Alliance Airlines launched their own independent Regular Public Transport (RPT) flights between Brisbane and the Sunshine Coast and Emerald Airport.  The UTY4078/4079 service late on Monday 1 March was operated by Fokker F-70 VH-NUY, while the UTY4072/4073 service early on Tuesday 2 March was also operated by Fokker F-70 VH-NUY.
These 'new' services are merely the airlines selling off the remaining seats on what are long-running Fly-in Fly-out (FIFO) charter flights.
Finally, it's worth noting that also on Monday 1 March, Alliance Airlines Embraer E-190 regional jet VH-UYZ commenced a series of 3-4 daily training and proving flights from and back to Brisbane. 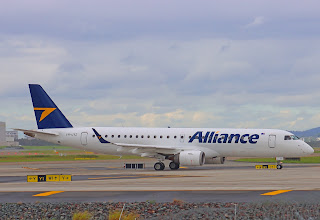 VH-UYZ has been noted completing missed approaches at the Sunshine Coast and Gold Coast in recent days, and we hope that a visit into Central Queensland isn't too far away!
VH-UYZ is ex-N922QQ with the former Copa Airlines E-190 being delivered to Alliance Airlines in Brisbane in October 2020.
Alliance Airlines took delivery of their fourth of 30 E-190 regional jets over this last weekend with N998QQ arriving into Brisbane on Saturday 27 February.  It should become VH-UYO.
Photos taken by 'AC' and Lloyd Fox  ©
Posted by Damian F at 7:09 PM