On Monday 29 March, new Navair Flight Operations Embraer EMB-500 Phenom 100 bizjet VH-LXZ made its first visit to Central Queensland, noted touching down at Emerald Airport after flying up from its Bankstown base. 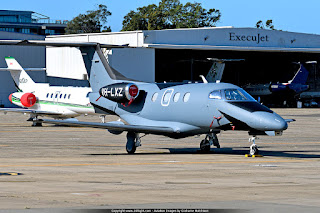 The new Phenom bizjet - which was only registered and delivered earlier this month - then departed to Cairns and Townsville.
As shown above, VH-LXZ only arrived into the country via Broome, Alice Springs and Sydney (pictured) during the middle part of this month!
UPDATE!  On Wednesday 30 March, VH-LXZ continued South from Townsville to Mackay Airport and then Rockhampton Airport with it arriving into the beef capital after dark.
Also on Monday 29 March, the locally-based Embraer EMB-550 Legacy 500 bizjet N142GZ was back in the air out of Mackay Airport, flying down to Brisbane and back.  It had only just returned to the Sugar City from a three-day stay at the capital the previous day.
And the familiar sight of Balmoral Air Dassault Falcon 2000LX bizjet VH-WIO was noted arriving into Hamilton Island Airport from its Bankstown base.
At the time of writing, it appears to be staying on Hamo for at least the night.
UPDATE!  On Tuesday 30 March, VH-WIO departed Hamilton Island Airport and returned to Bankstown.
Meanwhile, also on Monday 29 March, Townsville Airlines (Flightech Air Logistics) Beech B200 King Air VH-WZN arrived into Rockhampton Airport from Cairns and Townsville before it then departed to Brisbane.  Later in the day, VH-WZN returned North to Cairns via Mackay Airport.
While fellow King Air - the Queensland Government Airwing (State of Queensland) Raytheon B300 Super King Air VH-SGQ - departed Blackall Airport after arriving there from Cairns and Brisbane the previous day.
While another King Air - Brisbane-based Altitude Aviation Raytheon B200 King Air VH-EEL - flew up from Archerfield to Dalby before then heading to the Australian Country Choice (ACC) properties Dooloogarah (YDLG), Babbiloora (YABB) and Brindley Park (YABP).  It then returned to Dalby and Archerfield.
And the Queensland Police Service (Airwing) Cessna 208 Caravan VH-PSY arrived into Rockhampton Airport from Cairns and Townsville before later departing back to Cairns.
Finally, some helicopter action, also on Monday 29 March, included a pair of NQ Heliworx Eurocopter AS.350 Squirrel helicopters heading North from Archerfield to Townsville via Gladstone and Mackay Airports.  Recently registered VH-YHQ headed up first followed later in the day by VH-JKX.
While Aeropower McDonnell Douglas Helicopter Company (MDHC) 369D VH-PLJ continued flying powerline inspection flights out of and back to Rockhampton Airport after arriving over the weekend.
Sincere thanks to Sydney-based specialist aviation photographer Grahame Hutchison for allowing us to share this great photo!

All photos taken by Grahame Hutchison  ©
Posted by Damian F at 8:47 PM