On Wednesday 10 March, Alliance Airlines Fokker F-70 jet VH-QQW was photographed operating the weekly Fly-in Fly-out (FIFO) closed charter flight into Rockhampton Airport. It arrived from Brisbane as UTY8446 and later returned to the capital but as UTY8447. 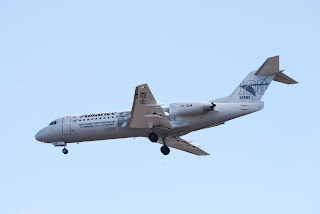 As mentioned previously, VH-QQW has been painted into a livery to commemorate a significant Australian aviation event in the form of the 100th anniversary of the arrival of the first aerial flight from England on 10th December 1919.


Hudson Fysh and Paul McGinness, representing the Australian defence department, were the first to officially welcome the four airmen. On 16 November 1920 Fysh and McGinness with grazier Fergus McMaster founded Queensland and Northern Territory Aerial Services Ltd (QANTAS). No doubt inspired by the heroic achievements of the Vimy crew, the previous year.

Sincere thanks to local plane spotter Scott H for taking the time to capture and send through these great photos of a great looking visitor to CQ!

All photos taken by Scott Harris  ©
Posted by Damian F at 9:34 PM