On Monday 29 March, an interesting first-time visitor to Central Queensland in the form of Hevilift Express / Hevilift Australia (Fixed Wing Division) ATR 42-320F Freighter VH-YWX was spotted visiting Rockhampton and Mackay Airports while completing a series of training flights between Brisbane and Cairns. 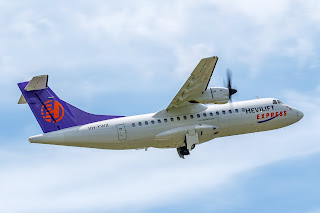 It initially flew up to Rockhampton Airport from Brisbane as 'HT401' / "Hevilift 401" before then continuing up to Mackay Airport as 'HT402' / "Hevilift 402".
VH-YWX then continued up to Townsville and Cairns. as HT403/4.
VH-YWX was registered to Hevilift Australia (Fixed Wing Division) in November 2020 after previously being registered to Hevilift (Papua New Guinea) as P2-AVV.  The almost 29-year-old ATR has been a long-term resident at Cairns Airport having being stored there since 2014.
Prior to its arrival into Cairns, the ATR was operated by Airlink in Papua New Guinea as P2-ALA and before this, it operated in Algeria with Khalifa Airways as F-OHRO and (British Airways) Cityflyer Express as G-BUEB.
Nice!
Sincere thanks to local plane spotter Steve V for allowing us to share this great photo of a great first-time visitor to Rockhampton Airport!
Photo taken by Steve Vit  ©
Posted by Damian F at 8:29 PM