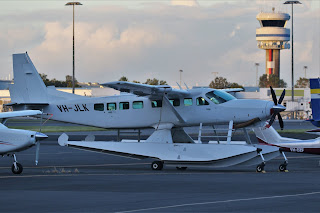 The plain white Caravan has previously been flown by a Sydney business man and departed its Bankstown base for Coffs Harbour and the Sunshine Coast before calling into Mackay Airport for fuel.  VH-JLK then continued to Cairns where it is pictured above soon after its arrival.
Meanwhile, also on Sunday 14 March, a couple of nice and familiar bizjets were noted coming and going around the region.
Australian-based but American-registered Bombardier BD-700-1A10 Global Express bizjet N915JG was noted departing Hamilton Island Airport for its Melbourne (Essendon) base.  It had arrived into Hamo from Brisbane on Thursday 11 March.
The often visiting American-registered Eclipse EA500 bizjet N257AK was noted arriving into the Whitsunday Airport at Shute Harbour from Archerfield.
And after spending some three months in the hangar, Gulf Coast Aviation Cessna 510 Citation Mustang bizjet VH-KXM was noted departing Bankstown for Emerald Airport and then Cairns.
Finally, on Saturday 13 March,  Linfox Express Charter / Air National Australia Canadair CL-600-2B16 Challenger 605 bizjet VH-LEF was noted departing Hamilton Island Airport for Melbourne (Avalon) and Melbourne (Essendon).  It had arrived into Hamo from Essendon back on Monday 8 March.
While Beech 58 Baron VH-CUY landed at Lotus Creek from Townsville before later departing to its Cloncurry base.
And McDermott Aviation / Heli-Lift Australia Aerospatiale 365N2 Dauphin 2 helicopter N366SR was noted landing at The Old Station after flying up from the Sunshine Coast.  It returned to the Sunny Coast on Sunday 14 March.
Photo taken by Jonathan Williams  ©
Posted by Damian F at 9:14 PM