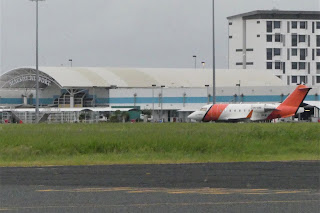 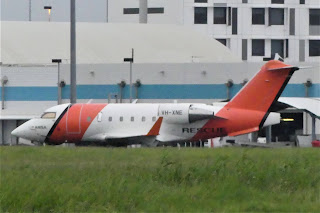 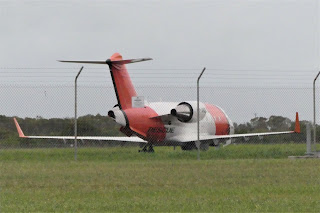 VH-XNE was photographed above still parked on the Mackay Airport parking apron early on Tuesday 2 March.  It was noted departing Mackay Airport later in the morning for Cairns, flying again as "Rescue 330".
Of interest, fellow AMSA Challenger 604 bizjet VH-XNC "Rescue 440" was noted flying from and back to Cairns Airport in mid-February , while VH-XND "Rescue 660" seems to be currently based at Melbourne (Essendon) and VH-XNF "Rescue 550" is currently based at Perth.
As we've previously reported, Cobham SAR Services Pty Ltd (Cobham) was contracted in 2014 to provide a new new search and rescue agreement for AMSA using four Bombardier Challenger CL-604 bizjets from late 2016 for a period of 12 years.
Posted by Damian F at 7:00 PM