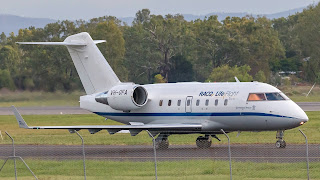 The Challenger then departed to Rockhampton Airport before later heading to Brisbane.
VH-OFA "Ambulance 614" was then photographed above soon after it touched down after returning to Rockhampton Airport from Brisbane.  It then continued back to Townsville a little later in the evening.
Photo taken by Steve Vit  ©
Posted by Damian F at 11:07 PM