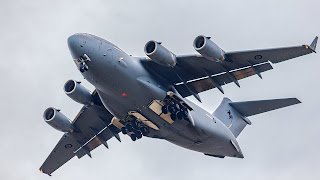 The C-17 departed RAAF Base Amberley and flew up to Rocky where it completed the missed approach.  It then flew South to complete another missed approach at the Sunshine Coast before it then returned to Amberley.
A41-211 was noted flying as "Stallion 21".
Meanwhile, also on Monday 1 March, Royal Australian Air Force (RAAF) Boeing B737-7ES / E-7A Wedgetail Airborne Early Warning & Control (AEW&C) aircraft A30-005 was noted completing airwork at Hervey Bay (Fraser Coast) Airport.
It flew up to Hervey Bay Airport from RAAF Base Williamtown via a missed approach at Coffs Harbour.  After completing the airwork, A30-005 returned to Williamtown via another missed approach at the Gold Coast.
A30-005 was noted flying as "Wedgetail 02".
Finally, also on Monday 1 March, Australian Army NH Industries MRH-90 Multi-Role Helicopter A40-020 as "Destrier 112" visited Proserpine (Whitsunday Coast) Airport, arriving from and later departing back to Townsville.
While fellow Australian Army MRH-90 helicopter A40-022 but as "Saxon 42" flew out of the Oakey Army Aviation Centre to Roma Airport where it completed a missed approach.  It then returned to Oakey.
Photo taken by Steve Vit  ©
Posted by Damian F at 8:39 PM