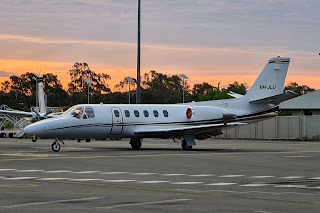 It had arrived into Emerald Airport from Bendigo via Biloela / Thangool Airport on Monday 1 March and was photographed above a little later in the day parked up as it prepared for its overnight stay.
Albury (New South Wales) based Cessna 525 CitationJet CJ1+ bizjet VH-JSZ called into Charters Towers Aerodrome also on Tuesday 2 March.  It arrived from Archerfield and departed to Brisbane.
Meanwhile, also on Tuesday 2 March, Beech 95-B55 VH-MYM flew out from its Gayndah Airport base to Roma and Emerald Airports.  It later returned to Gayndah Airport.
Brescon (Toowoomba) Beech B200 VH-WXN was noted departing Toowoomba-Wellcamp and flying up to Rolleston Aerodrome via Chinchilla and Yellow Bank Airports.  It then returned to Chinchilla Airport and Wellcamp.
And Great Western Aviation Beech B200 VH-XGV made its weekly visit to my local Clermont Aerodrome.  It arrived from and later departed back to Brisbane.
While Cessna 210L VH-PVW flew into Tartrus Airstrip from Noosa before then heading West to Emerald Airport.
UPDATE!  On Wednesday 3 March, VH-PVW returned direct to Noosa from Emerald Airport.
Finally, also on Tuesday 2 March, Townsville Airlines Beech 1900D VH-RUE called into Rockhampton Airport from Cairns.  It later departed to Proserpine (Whitsunday Coast) Airport, Townsville and back to Cairns.
Photo taken by 'AC'  ©
Posted by Damian F at 8:37 PM