On Monday 1 March, Queensland Government (QGAir) Rescue (State of Queensland) Agusta AW139 helicopter VH-ESH was photographed as it arrived into Rockhampton Airport while ferrying South from Townsville to Archerfield. 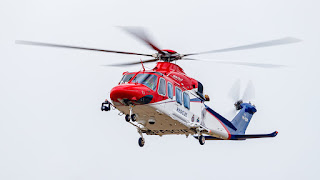 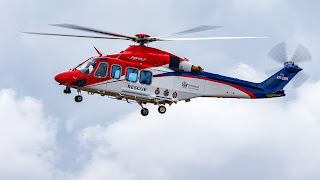 VH-ESH has operating out of both Cairns and Townsville Airports since late 2020 and so it is presumed that it has ferried from Townsville to Archerfield for planned maintenance.
As we have reported previously, this 'rotational system' of airframes that QGAir utilises ensure the even distribution of flying hours on each of the their Rescue helicopters. This system avoids the need to have multiple helicopters offline for simultaneous scheduled maintenance.
Sincere thanks to local photographer Steve V for allowing us to share these great photos!
All photos taken by Steve Vit  ©
Posted by Damian F at 9:44 PM