On Wednesday 17 March, Alliance Airlines Embraer E-190 regional jet VH-UYZ was photographed as it made its first ever visit to Central Queensland, calling into Rockhampton Airport as it continued a series of daily training and proving flights from and back to Brisbane. 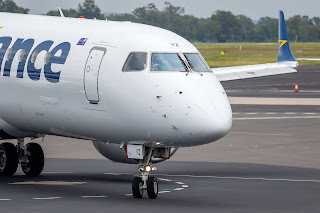 It arrived from Brisbane as UTY9833 and after some ground crew training, it returned to the capital but as UTY9834. 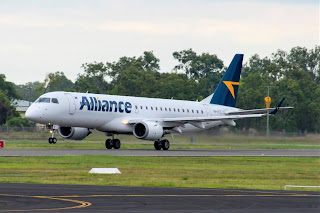 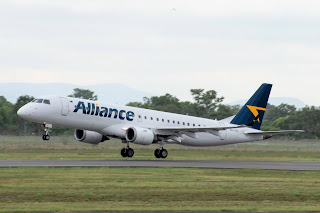 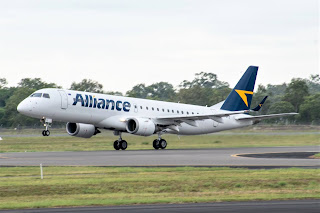 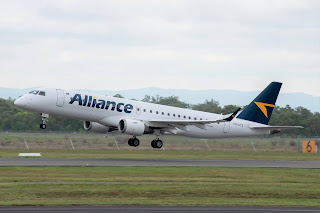 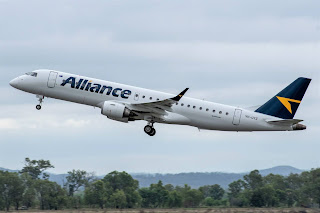 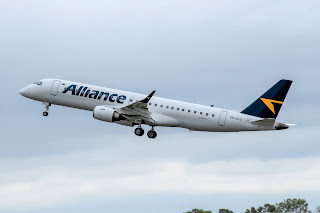 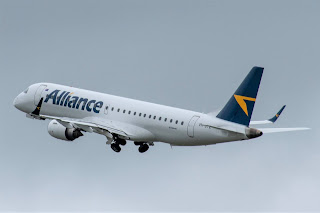 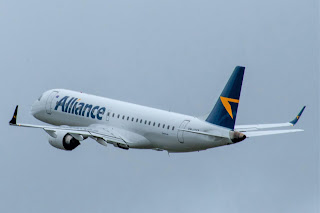 VH-UYZ is ex-N922QQ with the former Copa Airlines E-190 being delivered to Alliance Airlines in Brisbane in October 2020.
Meanwhile, breaking cover this week is the next Alliance Airlines E-190 regional jet to be delivered which wears a special commemorative livery.
The E-190 is currently registered N912QQ and is the 5th (of 30) of the type aircraft joining Alliance Airlines fleet.  It will be registered VH-UYB.
The aircraft is powered by two GE CF34-10E5 engines and has a passenger configuration of 10 Business Class seats and 84 Economy seats.
The photo above shows N912QQ at San Jose (Costa Rica) fresh out of the paint shop.  The design of the livery was undertaken by Alliance Airlines and Lila Design, Tilburg in close consultation with the Royal Australian Air Force and is a tribute to Air Force’s 100 years of service to Australia on the 31st March 2021.
The one off metallic paint is inspired by the color of uniforms worn by many, many thousands of dedicated Air Force personnel and has been specially formulated by Alliance Airlines in close co-operation with Mankiewicz Coatings.
The F-35A Lightning II, the Australian Defence Force’s Air first fifth-generation air combat capability, is silhouetted speeding through the Air Force 100 Logo.
A SE5a bi-plane, Spitfire, Canberra, F-111, P-8A Poseidon, C-17A Globemaster III and F/A-18F Super Hornet representing different eras and historic and significant Air Force aircraft feature on the tail.
The aircraft is scheduled to operate from San Jose (Costa Rica) to San Diego (USA) to Honolulu (USA) to Majuro (Marshall Islands) and arrive in Brisbane (Australia) prior to the end of the month.  Once arrived the aircraft will join the Australian civil aircraft register as VH-UYB and operate in revenue service throughout Australia.
Alliance Airlines has many aircraft with historic and commemorative liveries, including the 100th Anniversary of the 1919 Great Air Race, the 90th Anniversary of the 1928 first Trans Pacific Flight, Sir Charles Kingsford Smith’s 1931 Australia to England solo flight record attempt and Breast Cancer Network Australia.
Sincere thanks to the local plane spotters for taking the time to capture and send through these great photos!
Photos taken by Steve Vit and Michael Malick  ©
Posted by Damian F at 9:07 PM