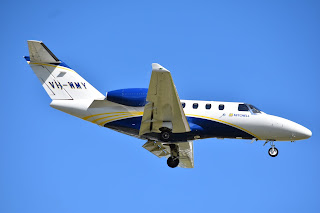 The little citation bizjet arrived into Hamo from its Melbourne (Moorabbin) base via Melbourne (Essendon) and Townsville where it is pictured arriving above.

At the time of writing, it appears that VH-WMY is staying at Hamo for at least the night.

UPDATE!  On Thursday 11 March, VH-WMY departed Hamilton Island Airport and returned to Essendon and then Moorabbin.

Finally also on Wednesday 10 March, Brisbane-based Pilatus PC-12/47E VH-AAC landed at Emerald Airport from a Station West of Mount Isa.  It then departed to Archerfield.

And Brescon (Toowoomba) Beech B200 VH-WXN flew up from Toowoomba-Wellcamp to Emerald Airport where it looked to be staying for the night.
UPDATE!  On Thursday 11 March, VH-WXN departed Emerald Airport and returned to Wellcamp.
Photo taken by Graham Aspinall  ©
Posted by Damian F at 10:49 PM