On Thursday 4 March, Bundaberg-based CromAir Cessna 414A Chancellor VH-CBT was spotted at Rockhampton Airport.  It had earlier flown up from Bundaberg Airport to Rocky before continuing West to Emerald Airport and the Labona Station Airstrip within Adani Australia's (Bravus Mining & Resources) Carmichael Coal Mine site. 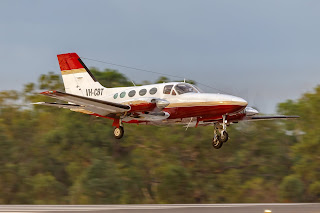 During the afternoon, VH-CBT then reversed the entire flight, finishing the day back at its Bundaberg Airport base.
Meanwhile, also on Thursday 4 March, the visiting Torrens Creek (Hughenden) based SOCATA TBM700 VH-CEA departed Rockhampton Airport for Mareeba. It had arrived from Melbourne (Essendon) the previous day.  This aircraft has recently been re-registered from a previously Victorian-based operator.
While locally-based R-Mach Aviation's Lancair 4 VH-VIE (formerly VH-XVP) flew to Griffith in New South Wales and back to Rockhampton Airport.
And Beech 95-B55 VH-MYM flew out from its Gayndah Airport base to Gordon and return.
Finally, also on Thursday 4 March, Brisbane-based Pilatus PC-12/47E VH-AAC departed Goonoo Feedlot (South of Comet) to Surat before flying to Archerfield.
And Redjet Aviation Piper PA-31 Navajo VH-PJU visited my local Clermont Aerodrome once again from its Toowoomba base.
Photo taken by Steve Vit  ©
Posted by Damian F at 8:09 PM