Over this week, Gulf Coast Aviation Cessna 510 Citation Mustang bizet VH-KXM was noted calling into Longreach Airport twice while on a journey North on Tuesday 7 April and then back South on Saturday 11 April. 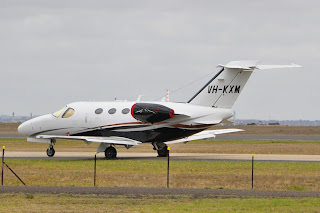 In between, it was a big week of flights for VH-KXM which saw it initially call into Vanrook Station from Bankstown and Longreach.  From there it flew around Far North Queensland before returning to Bankstown via Longreach on Saturday.

Meanwhile, also calling into Longreach Airport over the course of last week, Cessna 441 VH-OPM, which is registered in Warrnambool in Victoria, visited Longreach twice, flying between Warrnambool and Cairns and back on Thursday 9 April and Sunday 13 April.

Interair (Photomapping Services) Cessna 402B VH-KCL passed through Longreach on Saturday 11 April, arriving from Cairns and departing to Cobar and Melbourne (Essendon).

And the Queensland Government (State of Queensland) Raytheon B300 Super King Air VH-SGQ called in briefly on Tuesday 7 April, arriving from Boulia and departing to Brisbane.
Posted by Damian F at 11:54 PM