Details from the RAAF 'Flying Operations' website (http://airforce.gov.au/) indicate a single F/A-18F Super Hornet aircraft from Number 82 Wing at RAAF Base Amberley will conduct a flypast of Anzac Day commemoration activities on Saturday 25 April around Queensland, including in CQ at:
10:15am - Hervey Bay
10:20am - Maryborough
10:20am - Woodenbong
10:25am - Howard
10:40am - Calliope
10:45am - Mount Larcom
10:50am - Rockhampton

A full list of Queensland flypasts is shown below.. 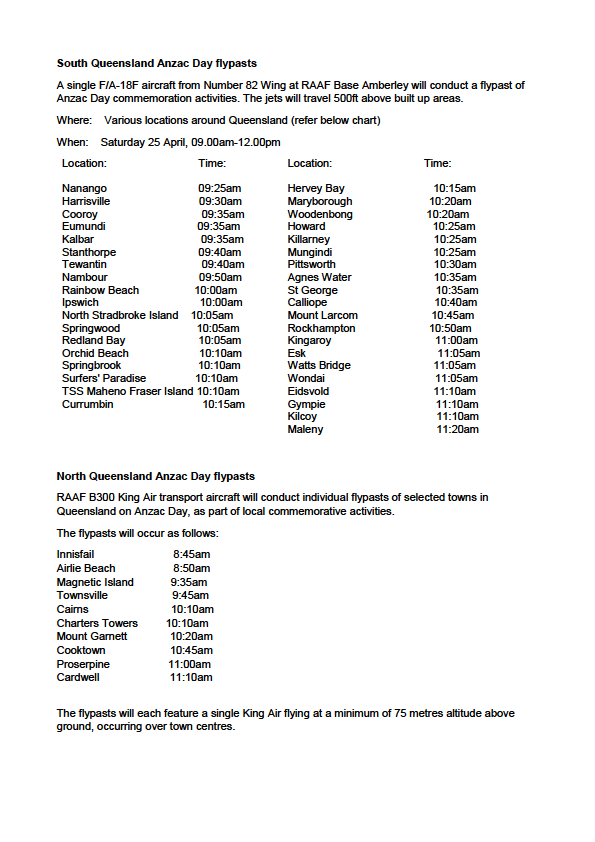 The RAAF 'Flying Operations' wesbite contains a full Australia-wide list, and advises everyone that "Please note that flypasts have been allocated based on available resources, and are subject to operational and weather considerations. All activities and times are subject to variation."

Finally, as we mentioned on our Facebook page, Caboolture-based Mustang Flights Australia are flying CAC CA-18 Mk21 Mustang VH-MFT (originally A68-110) - named 'Snifter' - North to ‪‎Bundaberg‬ and ‪Mackay‬ on Friday 24 April.  'Snifter' will be in Bundy from 24-26 April to take part in the ANZAC day commemorations marking 100 years since the Gallipoli landings.  An opportunity will then be provided to anyone wanting a ride in this classic aircraft to take a backseat ride at discounted rates!.
Posted by Damian F at 8:03 AM