With the bushfire crisis moving further South in Queensland, and particularly in parts of the Darling Downs area, some of the bushfire fighting helicopters have moved South from Central Queensland and are seemingly now basing out of Toowoomba Airport.  A pair of larger bushfire fighting helicopter were noted passing through Central Queensland Airports heading South over the course of Friday 15 November and Saturday 16 November.


Noted arriving into Rockhampton Airport from the Whitsunday Airport at Shute Harbour late on Friday 15 November was Helibiz operated Bell UH-1H Iroquois 'Huey' helicopter VH-UHE - dubbed 'Eagle One' - which was flying as "Helitack 423".  On Saturday 16 November, VH-UHE departed Rockhampton Airport and continued to the South.

UPDATE!  VH-ZVP "Helitack 421" was spotted heading back North, arriving into Gladstone Airport late on Thursday 21 November and then departing to Mackay Airport early on Friday 22 November. 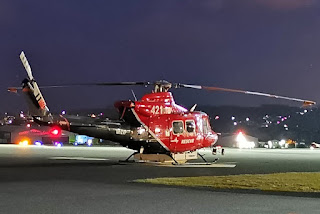 
Finally, also on Saturday 16 November, the Air Affairs Australia / Gojet Gates LearJet 35A bizjet VH-LJJ "Firescan 123" was back in the air and was noted visiting Hervey Bay (Fraser Coast) Airport for a short time while flying out of and back to Brisbane on an aerial reconnaissance flight.