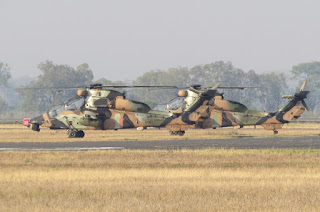 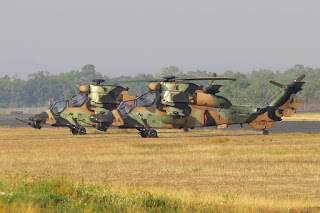 As previously mentioned, the two Tigers - flown by the 1st Aviation Regiment based at Darwin - were identified as A38-012, A38-022, and looked to fly up from Oakey late on Wednesday 13 November.  They are photographed above early on Thursday 14 November.

Since their arrival, the two Tigers were noted departing Rockhampton Airport after dark and flying towards Yeppoon and the Capricorn Coast region where it is believed that they are doing some nighttime mapping of the bushfire zone in the area.  Each time, they later returned to Rockhampton Airport where they spent the night parked.


On Friday evening, the Tigers departed Rockhampton Airport for Oakey separately as "Vandal 38" and then "Vandal 23".

Meanwhile, in support of the Tigers, also late on Friday 15 November, a single Australian Army NH Industries MRH-90 Multi-Role Helicopter was noted calling into Rockhampton Airport.  The MRH-90 was identified as A40-032 and looked to fly up from and then later return to Oakey as "Saxon 61".