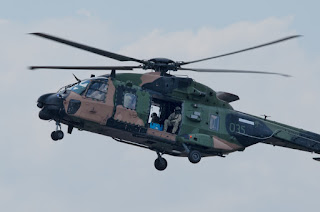 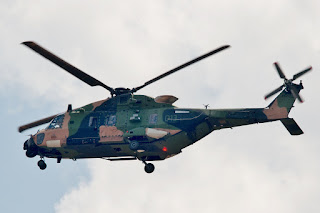 It was interesting to note however, that for this flight, they had swapped over their radio callsigns with A40-035 flying as "Destrier 115" while A40-013 was flying as "Warhorse 246".

Both MRH-90s arrived from Oakey and later departed to Townsville.

Meanwhile, also on Tuesday 26 November, and for the second day in-a-row, Royal Australian Air Force (RAAF) Beech B350 Super King Air turboprops A32-998 "Torch 24" and A32-008 "Torch 29" were again back in the air out of the Sunshine Coast and again at CQ Airports.  At various times during the day, they were noted completing airwork at Emerald, Mackay, Hamilton Island, Proserpine (Whitsunday Coast), Taroom and Gladstone Airports, with them also landing at Mackay and Rockhampton Airports respectively.